Intensive learning is not the same as intensive training in that the former is about learning more and the latter on learning better. Can both objectives be reconciled?

Four days after the video of my student demonstrating the basic pole thrust (refer here) was made we shot another footage, part of which is shown below :-

The progress is pretty decent considering that he has a lot to learn but not as much time for self-practice.

On the final day of learning we covered pole partner practice. Below is part of footage shot during the second session which is a few hours after the first session. This exercise develops whole body power.

Another exercise shown below is for the training of sudden changes in direction to flank the opponent and take out his leading hand. Of course, in training we strike the pole rather than the hand to avoid injury. In this instance, we just worked on getting the position and left out the striking part.

The pole exercises were practiced with a light touch to minimize noise disturbance as poles knocking against each other can be loud and annoying.

The end of the year looked to be a slow, lazy period. And then my student said he wanted to come back to learn and also to escape the lonely winter nights.

So here we are just after the halfway mark of an intensive 10 days learning period. Since he has already developed a foundation he can go for more intermediate and advanced material.

First up on the agenda is the long pole because it is a much easier weapon to learn than the straight sword. And I was right.

Despite the patchy flow the outer appearances are there. In fact, you can see from the video below that he can do the basic stabbing motion reasonably after a few minutes of instruction on the first day :-

Not bad, right? Below is a clip to compare his performance against :-

In this pole form we are using a gripping method that is suitable for beginners. At this stage the more advanced method of gripping closer would be difficult for a beginner to handle.

To put my point across I did an impromptu demo using a few movements from Master Leong’s Shaolin 6.5 pole form :-

The purpose of the demo is to show how despite the closer grips one must still be able to handle the pole to perform techniques quickly, with power, coordination, timing and intent.

One of the difference between getting hit by a fist and a pole is that you can probably take a few punches but not a thrusting hit or a sudden tap from a pole. This was the main point I wanted to make to my student, X, when revising last week’s movements.

To avoid getting hit by an unforgiving pole strike it is important to understand how to be precise in moving when using the pole. Otherwise, we will expose our body to strikes.

Of course, if you do pole fighting against friends who don’t really know how to use a pole then you can get away with murder. However, if you ever try against a pole expert you will be struck very fast and very hard.

To this end the learning of weaponry in our Tai Chi is not merely focused on learning how to play a form and that’s it. Knowing how to apply, how to change, what is right and what is wrong can mean the difference between getting hit and not getting hit.

In this respect, I was lucky to have been tutored by the late Master Cheong Fook of the Ngok Gar Kuen system. Master Cheong was an expert in the Lee family pole which had been absorbed into the Ngok Gar syllabus. The method of the pole which I learned from Master Cheong emphasized using small circular movements and swift changes to prevail in an exchange. Below is a photo of Master Cheong teaching me the pole; this was taken when he was near to ninety years old. 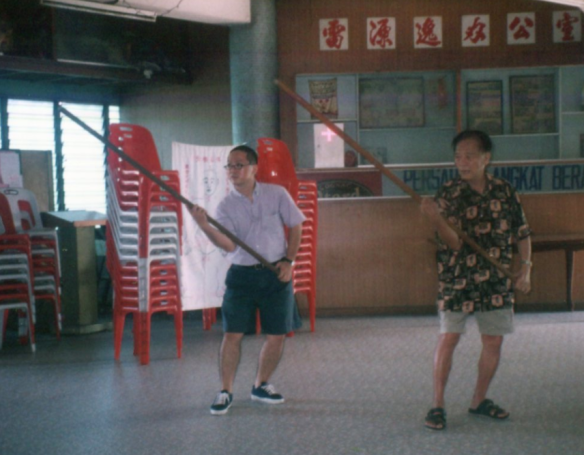 To Master Tai Chi Today it would help to learn the use of weapons as they teach us something that we may not learn if we just stick to the use of hands for combat. Not to mention that pole fighting can be fun; just watch the pole fight sequence from the classic Sammo Hung movie, Pedicab Driver.

Today was my student, X’s, second lesson in handling a long pole. I am moving him beyond the initial 2 movements of splitting and thrusting. The first two movements are important in laying the basics of postural definition, how to hold the pole, fundamental striking power, etc.

However, today we moved on to learning how to do simple defending movements such as Leaking Water Pole (demonstrated by Master Leong Lin Heng below) with forceful power.

I worked with X to develop correct body positioning, timing of movements, how to change from one posture to the next and so on by feeding him attacks slowly so that he can practice properly.

Learning the long pole will test X’s mastery of the basic principles from the Yang style and Wu style long forms with their respective characteristics. The Yang style should enable X to move the pole fluidly whereas the Wu style long form should enable him to generate forceful power using tight motions. In turn, the long pole will teach X to redefine his empty hand movements to move more economically and efficiently without sacrificing power.

The long pole is actually a much easier weapon to learn than the straight sword. As X was unfamiliar with handling a pole it was still not a walk in the park for him. He struggled with getting his body into the correct postural construct and was using too much strength such that the pole ended up wobbling.

Such wobbling might have looked powerful but the power was not coming through to the part of the pole that was used for hitting. So when I fed him attacks to practice against he could not knock me off my line even though I was not holding my pole firmly.

A good pole movement should be fluid, swift, forceful and unpredictable. In this way when the pole encounters the opponent’s weapon it will knock it way off position and before the opponent can recover the pole will be brought in to swiftly end the fight.

Striking each other’s pole is what we do in practice to avoid injury. In actual usage the techniques of the pole will be performed slightly differently to make the attacking and defending techniques even more direct and devastating. I let X felt what it was like to be struck by a pole thrust by placing the tip against his body and applying a slight force to move him back a few feet. In this way he can feel some pain but without being injured.

In practicing the issuance of power we gauge the power of the strike by feeling the resultant vibration that is generated when pole is struck against pole. A strong shocking power applied to the opponent’s weapon holding wrist will instantly result in a fracture or a concussion if used in a splitting strike to the top of the head.

Learning the long pole can help accelerate our ability to Master Tai Chi Today. There are other things we can learn through the pole form also but its another story for another time.