In our style of Tai Chi we call the Wu (Hao) style long form Kai-He (Open-Close) because its main training theme is the principle of how to open and close the body to generate power.

Our form is from Hao Weizhen who taught it to Li Xiangyuan who in turn passed it to Dong Yingchieh who then made it part of his family’s style of Tai Chi Chuan.

Below are two drawings depicting the Open and Close concept from Hao Shaoru’s book on Wu style Tai Chi. Hao is the third generation lineage holder of Wu style. His father Hao Yueru is the son of Hao Weizhen.

Wu (Hao) style trains a different set of characteristics from Yang style. So when we first learn Wu (Hao) we should pay more attention to the differences so that we can bring out their outstanding flavor.

After learning Yang style it is natural to gravitate towards a Yang-centric flavor as demonstrated by my student on his first lesson in Wu (Hao) style. 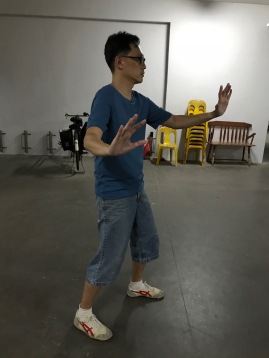 But after developing a foundation over years it is also easier to tweak his posture and made it more Wu (Hao)-centric after a few tries as seen below :-

You can compare his posture to that of Liu Jishun who is the adopted son and disciple of Hao Shaoru below :-

Learning something new is never easy when it can be diametrically opposite of what one is used to. A bigger posture to a compact posture with internalized movements can be a challenge but at least my student can now understand why this form is sometimes known as hard style Tai Chi.

Yes, you read it right. Kai-He is our version of a “hard” style Tai Chi. After training for a while my student felt stiff. This is normal for beginners who have not learned to seek internal relaxation within a “stiff” structure.

I used the term “stiff” here within the context of mechanical engineering. This is because our version of “stiff” is not so much a tensed body but more like a body tightened like a highly strung bow. This specialized training is what enables us to send-off our push hands partner on contact. 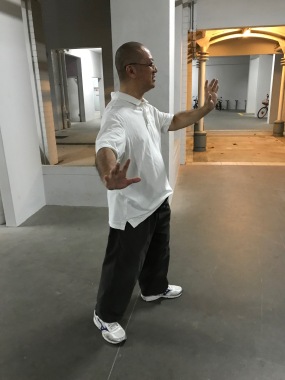 Despite having a high, small stance we must still develop a strong root through the use of intent. By adjusting our body we can then prime the 5 bows and keep tweaking them until we can generate the forces of Peng, Lu, Ji, An as desired.

The Wu (Hao) form represents a significant shift in paradigm for those used to Yang style type of flavored movements. With sufficient practice I am sure students will grow to love this alternate approach to applying the principles of the Tai Chi Classics.