It was as if he was immersed in a koan.

Instead of practicing the form as he would normally do I found my student standing in front of one of the shelter’s post tapping away, trying to work out the mechanics of the punch that I covered the previous week.

The post is hard, painful to the knuckles but it was an itch that had to be scratched to uncover the solution. So there he was picking away like a woodpecker.

Yeah, well, I’m no Iron Fist so I did one tap, not as hard as I did last week. Yeah, just dial back a bit on the mechanics.

Bones can be hard but tendons and ligaments I don’t think so – perhaps one reason why those who practice hard conditioning have problem holding small objects.

Having power is but one part of the equation. Having the means to deliver it is just as important so we should pay just as much if not more attention to the main details and nuances of how to perform Step Up, Parry & Punch.

Its one thing to hit with power. We should remember that our opponent will also try to hit us back. So learning how to perform Step Up, Parry & Punch is just as much about studying the means to defend, counter and deliver the power.

Though the performance of Step Up, Parry & Punch makes it seem as if it is but one technique, in reality there is more than one technique inside the sequence.

For example, when stepping diagonally after twisting the step the right fist can be changed to a palm to grab the opponent’s wrist and pull it towards him while using the left arm to bar the opponent’s arm just above the elbow. 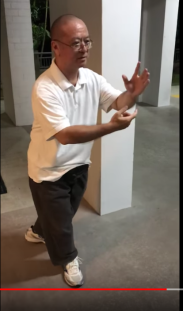 Alternatively, the twisting of the right leg can be a heel kick. The right fist then becomes a block whilst the left palm becomes a strike. 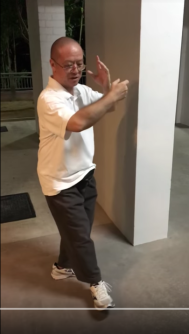 This is the reason for taking the practice at a slower pace so that we can develop a feel for the hidden and derived techniques.