July looked to be a slow month but it was not to be. It turned out to be a busy first week in July. Added on to it was a reader of TaijiKinesis Vol 2 from the United States who was in town for holiday and interested to learn Tai Chi.

IT is used to learn Tai Chi regularly 10 years ago until his teacher stopped traveling to the US to teach. Since then he had to visit his teacher up north to learn now and then. And before long 20 years had passed.

I asked IT to show me the 37 form that he had learned. The years of training showed as his performance was smooth and soft. He also attempted to learn Grandmaster Wei Shuren’s 22 form on his own and I have to say it was a pretty good effort as far as copying the movements go.

I recommended that he learn the 13-movement sequence of Yang Chengfu’s long form that was presented in TaijiKinesis Vol 2 for the following reasons :-

i. He already has a resource material and in this way he does not need to take as much notes since some of the essential points have already been listed in TaijiKinesis Vol 2

ii. He would not have to spend time trying to remember a new, more complicated sequence such as the 22 form. Instead, he can just focus on learning the different characteristics and the skills associated with the principles

iii. Since he has learned push hands we can have a shorter learning time for the form and spend the balance on learning push hands

IT agreed and we began the lesson. I asked him to explain why he performed his 37 form the way he did and he could not really explain as he was not taught how to use intention to control his movements. Not a problem.

We began his learning journey with simple essential principles – how centralize the body, how to keep balance, control the deployment of weight, basically the core learning of the Wuji posture.

Then we moved on to the Beginning Posture. The way we raised our arms is different in that we do not have the back of the hands facing upwards when bringing them up. A simple reason is that this promotes unnecessary tension.

Where to put the intention in lowering

the arms in Beginning Posture

Yes, I understand that it can develop power and IT certain has strong shoulders from the training. However, the power also promotes unwanted resistance when coming into contact with an opponent, an undesirable habit when it comes to push hands.

IT was able to pick up the movements quickly since as I mentioned our Yang style 108 form is basically the same as his 37 form apart from the different flavor. Before long we have moved on to Grasp Sparrow’s Tail. This proved a bit more challenging since there are a lot more differences in characteristics here that IT has to pickup.

For example, IT’s previous method of using the stance called for a more forward weight distribution and this ended up with the leg behind straightening more than necessary – see below :-

Sure, the body weight is more forward when the leg is straighter allowing us to put more power into our left arm. However, it comes at a cost and that is our balance is compromised. And more important, we will have to forego the use of an important Tai Chi Classics principle.

To fix this problem I had IT relax his right leg and scale back his power. The result is a more balanced posture with the power concealed inside like a primed spring ala the important Tai Chi Classics principle of 5 bows – see below :- 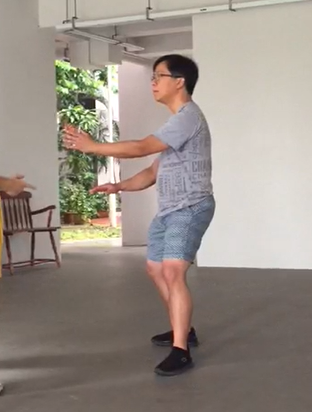 I also made a few other corrections to adjust his body’s power lines and tighten up his center gate’s access space. Then I spotted it – another important point. Can you see it? Anyway, below is his posture after the correction :-

Did you spot which area I corrected?

I am not quite finished with this post but I have to end here now. I will continue the rest when I have the time.