My student was telling about some of the exercises he learned in Aikido. They are familiar to me as I have seen them in Aikido books.

He got around to talking about seated exercises for learning connection. For the fun of it I held his arms and made him try to do it on me. He couldn’t do it on me because he was basically still trying to go head on against my strength.

So I explained how the principles of Tai Chi can be used to improve his Aikido practice. We worked through some examples standing up and later seating down on chairs that a religious group had left in the void deck. We didn’t try seating on the floor as we weren’t trying to do Aikido, merely examining how to overcome someone holding your arms firmly.

Some of the exercises we talked about are similar to what is shown in the video below :-

Mostly if someone is trying to hold both your wrists you can use the Yang style 108 raising hands movement to break the power and send the training partner back. This is simple and straightforward.

The more interesting and difficult one would be where the person is holding and pressing your wrists down. When you are sitting down this would mean the your hands would be pressed against your thighs, making it more challenging for you to lift your arms.

When this is the scenario the way you would resolve it is by arching your body back so that you can use your entire upper body to raise your training partner’s arms to break his holding strength. You can see this exercise beginning 0:58 in the above video – the only difference is that they did not do it with the hands being pinned against the thighs at the start. The screenshot below shows how the upper body is used. 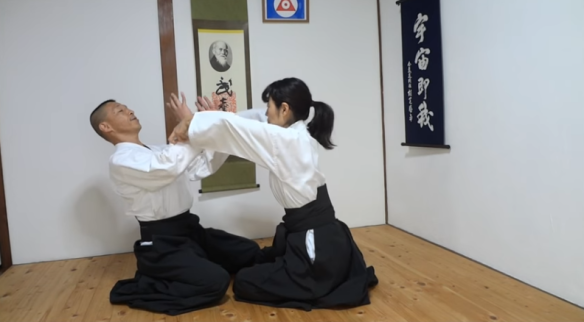 When my student tried to do it by arching his back he could not unify his body and ended up trying to forceful push my arms back. Since my weight was on top of his writst and pressing down this made it difficult.

I told him to imagine that his entire body is welded together so that he cannot move one part without moving the rest. Then all he has to do is arch his back and his arms would follow gently, making it easy to break the hold, and issue his power. Oh, in Tai Chi we do not need to breath in and out purposely when doing this. All we have to do is to use our intention.

It sounded easy but still took a few tries before getting it right. In Tai Chi we train this particular movement in the Wu (Hao) form. We call this movement Kai He which means open – close. If you do Kai He properly you can arch your back a lot lesser than shown in the above picture – in fact so little that if you didn’t look carefully you may not even notice it. The reason why we need to pay attention to this is that if we over do the arching movement we risk hurting our spine.

Plus, if you arch too much your training partner may let go and follow up by moving in and attacking you. So its important to bind your opponent to you by connecting to him such that he cannot let go without you attacking him the moment he tries to release his grip. Its when you can do it this way that you are connecting properly.

You will also be amazed at how this simple concept can amplify your power instantly. I say this because my student is still struggling to master the Yang 108 form. Yet, it was possible to get him to use a principle from the Wu (Hao) form correctly within a few minutes of testing. Now I only hope he can retain it and go back to his Aikido class to have some fun training.